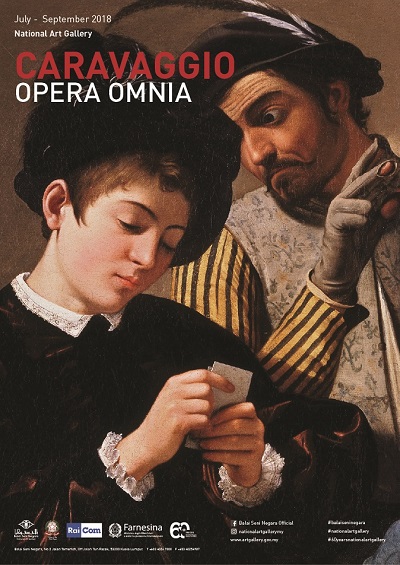 Michelangelo Merisi was born in Milan on 29 September 1571, the day of San Michele Arcangelo. Hence the name with which he was baptized.

He came from a small bourgeoisie family of trade professionals, originally from Caravaggio, a small town on the border between the provinces of Milan and Bergamo.

His father Fermo, a master mason, owned small pieces of land and maintained good relations with local citizens of note. When he moved to Rome to practice the profession of painter, Michelangelo Merisi was universally dubbed “Il Caravaggio” on account of his family’s origins.

Following a four-year apprenticeship at Simone Peterzano’s Milanese workshop and a probable though not certain trip to Venice, having absorbed all that was possible from the masters of Venetian and Lombard 16th century naturalism (Lorenzo Lotto, Savoldo, Vincenzo Campi),the twenty-one-year old found himself in Romein 1592.

At the start things were difficult – his presence in the workshop of the Cavaliere d’Arpino, prince of painters in Rome during those years, is well documented – following which his genius soon began to assert itself influencing the upper echelons of culture and power in Rome. Among his patrons, clients and collectors were the banker Ottavio Costa, Cardinals Francesco Maria del Monte and Scipione Borghese, the Marquis Vincenzo Giustiniani, the heirs to Cardinal Matteo Cointrel and Monsignor Tiberio Cerasi, Treasurer of the Apostolic Chamber, as well as the aristocratic Mattei, Patrizi and Colonna families.

Based on the presentation of visible truth as revealed by light, his art swept away the artifices of Mannerist painting then dominant in Rome coming across as a veritable revolution destined to fascinate intellectuals and artists.

Naturally such an avant-garde approach art was destined not to be to everyone’s taste and could generate perplexity and resistance. This would explain the “refusal” of famous works marking Caravaggio’s career: the first version of San Matteo in the Contarelli Chapel, the Madonna dei Palafrenieri intended for the Basilica of San Pietro and today housed in the Galleria Borghese, the Louvre’s Morte della Vergine (Death of the Virgin) painted for Santa Maria della Scala.

Much has been written about the character of Caravaggio, his unreasonable and violent temper, the bad company he kept, often involved in duels, court proceedings and doing jail time. This is how his contemporary Flemish historian Karel van Marder describes him in a famous passage from 1603: “In Rome there is a certain Michel Angelo da Caravaggio who makes wonderful things…he is a mixture of wheat and chaff; indeed, he does not surrender himself to idleness continuously, but after having worked for a couple of weeks, he goes off for a month or two, his sword at his side and a servant behind him, and turns from one game to another, is very prone to dueling and quarreling, so that he is well-nigh impossible to frequent”.

In the end Caravaggio’s character and the disorderly life he led proved to be his downfall. On May 28, 1606, in a fight broken out during a game of jeu de paume (ball and court), Ranuccio Tomassoni, leader of the supporters for the opposing side, was killed. Sentenced to death, Caravaggio was forced to flee from Rome and the State. First a guest of the Colonna family in their fiefdom of Zagarolo, he then resided briefly in Naples and finally in Malta where he was knighted. But even in Malta, he was expelled from the Order for reasons unknown and ended up in jail. Having sprung jail, he took refuge in Sicily in 1608 and then again in Naples, producing his last great masterpieces. He died on 18 July 1610 at only thirty-nine years of age on the beach of Porto Ercole on a brief stop during his journey from Naples to Rome to obtain amnesty and the lifting of the ban from the Pope.