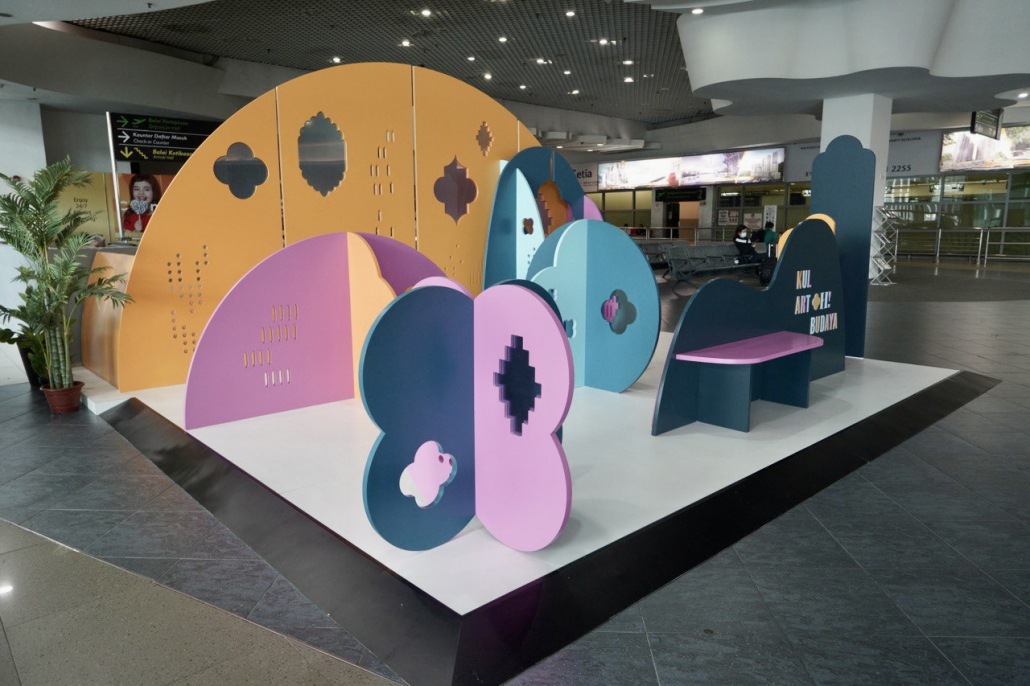 OH!Budaya welcomes audiences into a portal of cultures made up of vibrant panels interlocking each other to form a maze. Each panel is unique on its own and when put together, it stands beautifully to form a vivid pattern as a whole. The convergence of panels reminds us that we are all unique in our own ways yet share a common identity that is distinctly Malaysian.

It is a space to explore and embrace colours, people and culture without boundaries. Using simple cultural patterns made from repurposed plywood and plexiglas, it is a family-friendly and inclusive installation for everyone to enjoy. Peep through one of the windows or play hide and seek amongst the interlocking panels, it is truly a place for everyone to connect, interact and play. 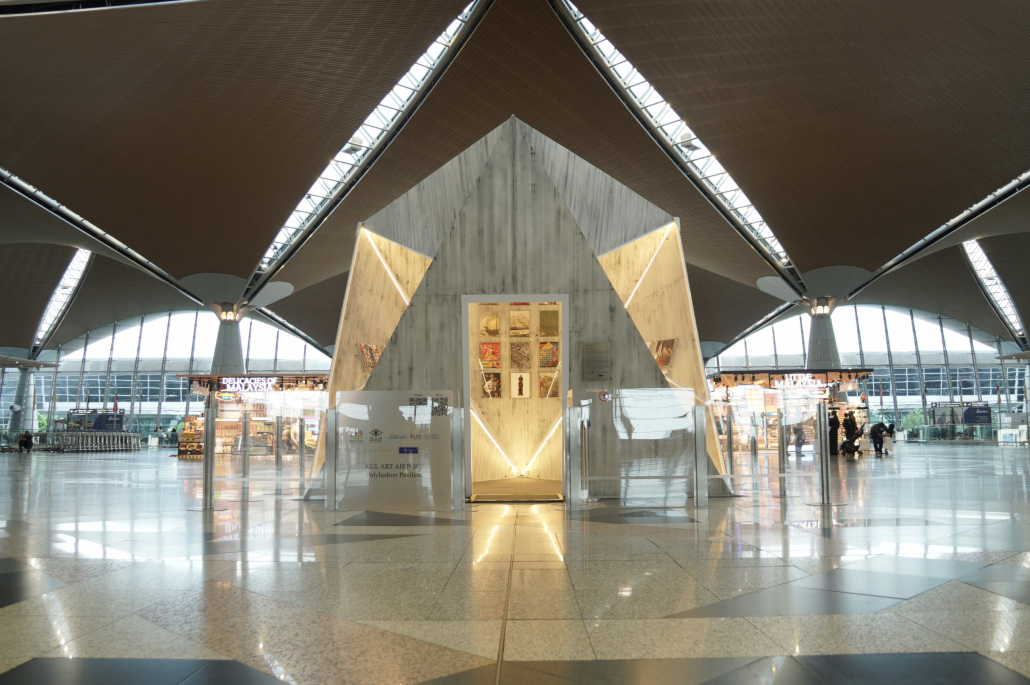 The pavilion is designed based on the study of sacred geometries originating from the East Malaysia tribes’ tattoos. The tattoo art uses sacred geometry, considered an ancient science in exploring and explaining energy patterns. These patterns create and unify all things in the universe. Geometry is a core part of mathematics, dating back to the 6th century BC. It was the core scientific principle behind ancient architecture, including Egyptian pyramids. Moreover, ancient Egyptians were the first to opt for geometric tattoos. The polyhedron pavilion is the resultant of the manipulation of sacred geometry.

The pavilion aims to harness the local identity inspired by the local arts and crafts. This displaceable pavilion structure moves to different cities and states to promote local arts & crafts with an array of posters displayed inside. The selection of posters will be showcasing National Art Gallery’s collection. The display will foster awareness of the local artwork and inspire local and international visitors to KLIA. 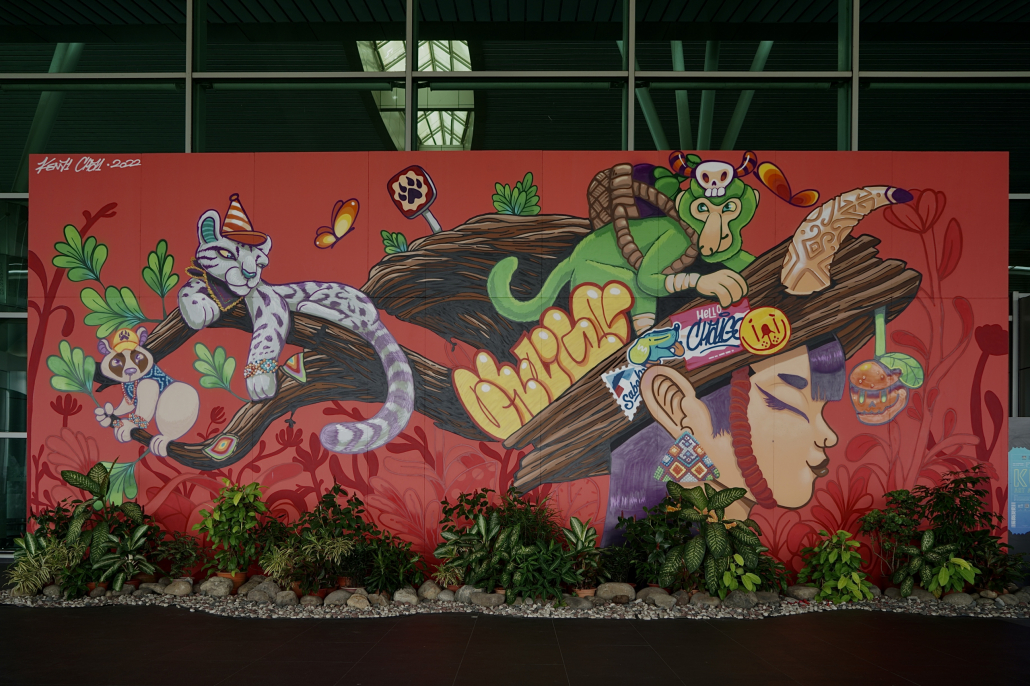 Name of artwork       : The Nature Mind of Landscape

The Nature Mind of Landscape is a work of graffiti reminding the current generation of the importance of nature and endangered wildlife animals. Describing several types of wild animals against the backdrop of a forest landscape and female figures show how humans relate to nature. This depiction of natural heritage and wildlife is also one of the uniqueness of Sabah that needs to be protected and taken care of.

The extent to which we open our eyes and realize that this is part of a natural ecosystem that still exists. May the next generation have the opportunity to know and understand nature and other life in line with modernity and the latest technology. 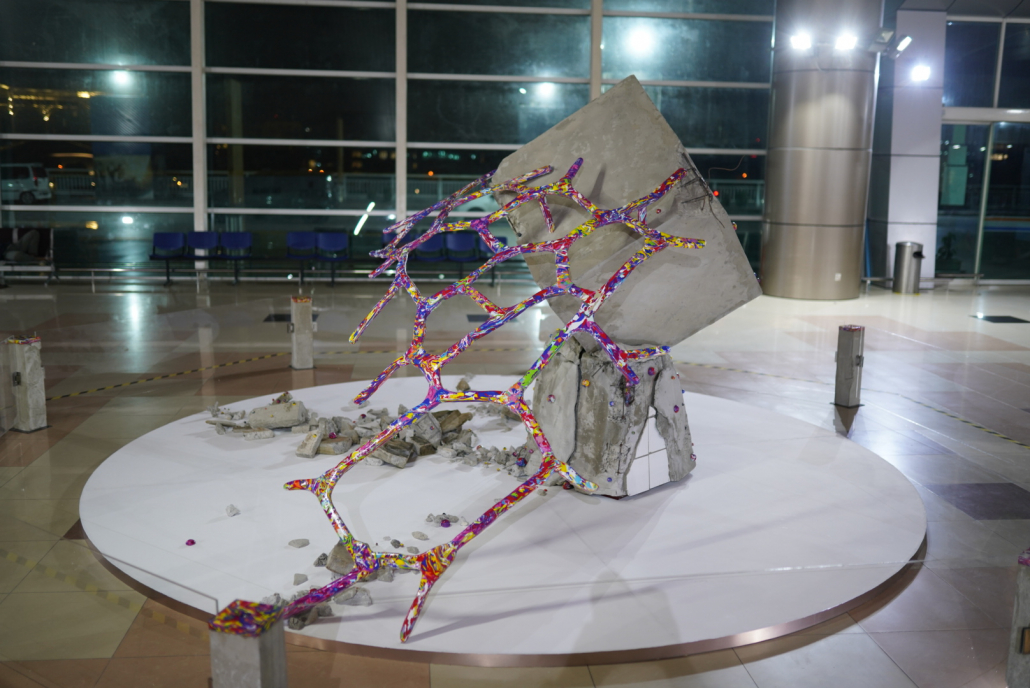 “Reciting Hope” is a sculpture produced with a vision to highlight the value of cultures and natures. As part of life, we make culture and nature around us the source of knowledge and inspiration towards the growth of digital technology. It has led to the production of “Reciting Hope”, which consists of elements from nature, developmental factors, and technological components united in a single work. In terms of representation and expression of this sculpture, it structures itself into two main forms (interrelated) that carry the meaning of “Hope”.

This broken concrete part is a representation of the consequences of wars, economic collapses, environmental disasters, and epidemics that lead to social issues, economic recessions, and poverty. At the same time, it still clings to hope (human nature). It binds us to the real question of ‘who are we?’ and ‘why are we here?’

‘Organic Fractal Growth’ is based on ‘Lady Veil Mushroom’ based on the concept of symbiosis, ‘Mutual Parasitism’. The symbiotic nature of ‘Lady Veil Mushroom’ is a perfect metaphor giving the meaning of protection, dependence, and continuity, which in this context carries the basic meaning of “Hope”. The form of ‘Organic Fractal Growth’ is based on ‘Fractal Theory’, which describes endless growth. The metaphor symbolizes ‘strength’ and ‘perseverance’ for human beings to rise again and hold onto hope.

By practising virtual technology, Augmented Reality (AR), viewers can see the Kenyalang bird emerge and fly gracefully around the artwork. It symbolizes the sustainable growth that is to be achieved in Sarawak through digital initiatives while preserving cultural and natural values.

The concept of participatory art further reinforces the vision of this artwork, as technology, culture, and nature need to coexist. As part of an ecosystem, just as humans benefit from nature, humans also need to provide the same benefits of proportion to nature for a brighter future.

In line with the concept, this work has been produced using manipulated waste (HDPE plastic) and concrete as the main material for the sculpture, where it can realize the idea of ​​resurrection. It brings back the main mission of the work to bring “Hope” as part of the ecosystem.