‘’In this work my engagement is of reflective and also a kind of criticism towards what is happening within the ‘Islamic World’ today-especially in what is happening in the Middle East conflict. As we know in any combatant situation within the Islamic tradition there is not only a tactical consideration but at most an ethical foundation towards how parties involved (especially the Muslim side) should engage.

As what is happening currently the world has left displacement with how reality is enfolding and with how myth (i.e. conspiracy theory’) is also becoming the discourse within the tragic (inhuman) or in the narrative seen as “religious prophecy”. For some people (consider as moderate Muslim) is a vacuum of both.

Most of the people that were slain were non-combatant and at most should be protected. With their horrific demise, especially that of Peter Kassig (Abdul Rahman Kassig) who’s story is very compelling, this situation that has been created by “the Muslim” has made a much bigger ambiguity within how we encounter reality and what is considered truth.’’

Fuad Arif had donated this artwork alongside 3 others in the same style and visual approaches in 2018, proposed by senior curator, Baktiar Naim. This piece reflects on the murder of Peter Kassig, an aid worker who was taken hostage and murdered by the Islamic State of Iraq and the Levant (ISIL).

The work is a juxtapose of the names of the slain humanitarian worker, Peter Kassig (Abdul Rahman Kassig) he was born on February 19, 1988, Indianapolis, U.S.A and died November 16, 2014 in Dabiq, Syria.

Peter was stationed in Syria, Lebanon, he was tasked to aid Syrian refugee. In the composition of work, the name was incorporated alongside images of a mosque that are located near Peter’s hometown, in this case the Mosque in Indianapolis, Indiana: Islamic Center of North America, Plainfield, Indiana. Peter was taken hostage and murdered in 2014.

Fuad use of contextual data and images to highlight his thoughts and response to contemporary issue showcased a fundamental function of the artist and contemporary art itself in enticing concerns to contemporary issue to the audience, discoursing conflicts, questioning reality and propagating critical thinking, this is especially true and necessary towards grave matter in need of support and attention of the society to help right the wrongs, or simply create a general awareness of the matter.

WHO IS PETER KASSIG?

Kassig was a humanitarian worker in Syria and Lebanon in which his job was to aid Syrian refugees through a non-government organization founded in 2012 named Special Emergency Response Assistance (2012). In 2013, he was on his way delivering food to the refugees when he was taken captive by Islamic State of Iraq and the Levant (ISIL). While in captivity, Kassig was allegedly converted to Muslim and changed his name to Abdul Rahman Kassig. However, his parents claimed later that Peter has always been wanting to voluntarily convert ever since he started working in Syria which declaims the argument that Peter Kassig went through forced conversion by the ISIL. In November 2014, after more than a year being held in captivity, ISIL released a video showing themselves standing over a severed human head which was later confirmed that it was Peter Kassig’s. 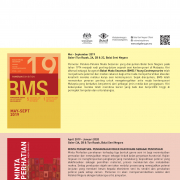 Walking Through a Songline Exhibition