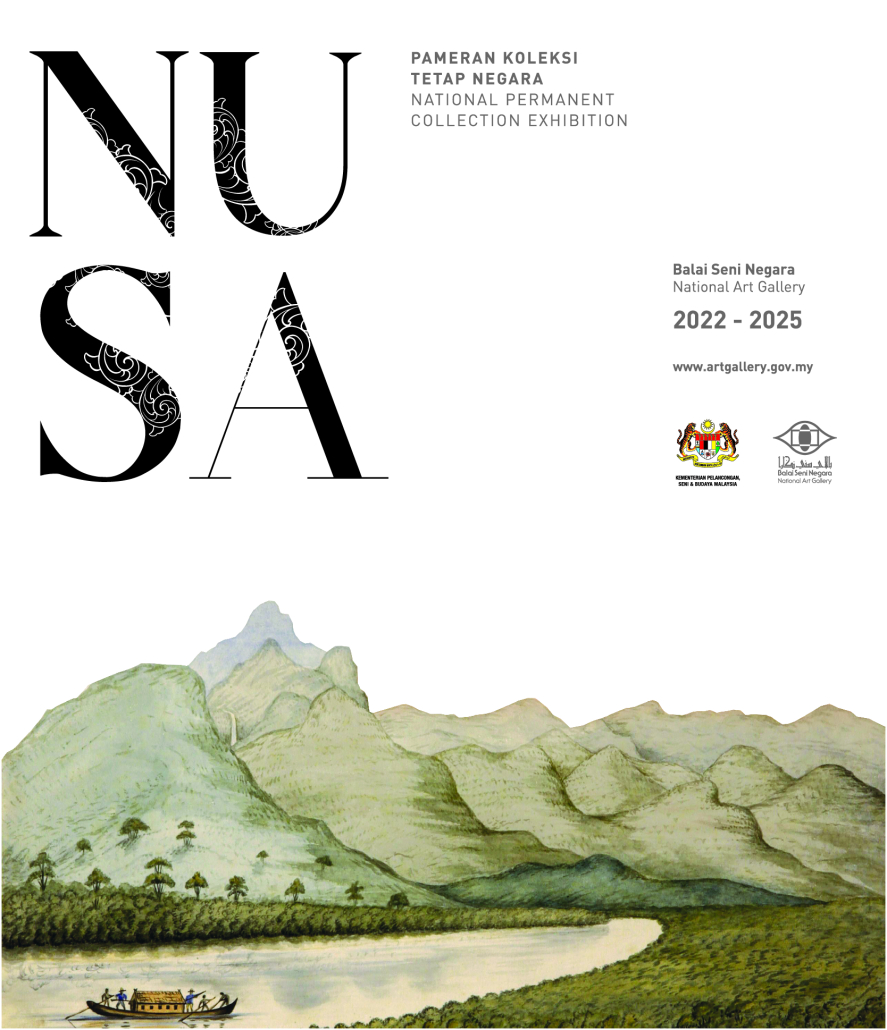 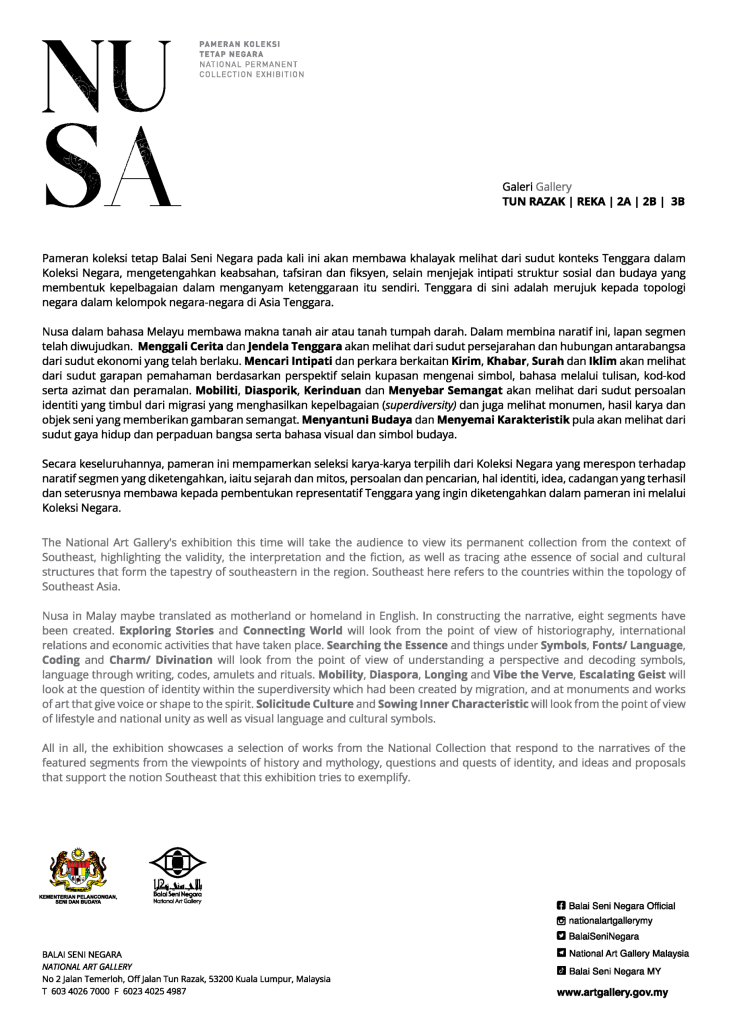 The late Aziz Sattar [b. 8 August 1925 – d.6 May 2014] (left) and S. Shamsuddin [b. 1 January 1929 – 4 June 2013] (right) were Malaya’s respectful actors and comedians and famously known for their iconic roles in a film series titled Bujang Lapok. The first four films were directed by Tan Sri Datuk Amar Teuku Zakaria Bin Teuku Nyak Puteh or popularly known as Tan Sri P Ramlee. Both Aziz Sattar and S. Shamsuddin reprised their role for the next three films following up from the success of the first one.

A fifth film was made titled Bujang Lapok Kembali Daa(1986) was made after the passing of Tan Sri P Ramlee in 1973, with the director role changed to Aziz Satar and P Ramlee role as Ramlee reprised by his son,Nasir P Ramlee.

It marks the early approaches of Malaysian artist experimentati on of computer technology and digital prints to produce art, inspiring later appreciation, valuation and understanding of media art during the 80s and the 90s.

Dr. Kamarudzaman is listed as an expert in Taylor’s University, noted to have graduated with a Master of Arts, from the City of Birmingham Polytechnic, United Kingdom.

According to his linkedin profile Kamarudzaman Md Isa is A graduate from Manchester Metropolitan University with a Phd. In Industrial and Product design (1990-1994) He is currently An Associate professor in UNISEL (2016-present). According to Researchgate..net, he currently has 13 noted publications and 70 citations.

On the year 2004, The national art gallery had held a program called Wavelines which aim to uniquely capture the beauty of Terengganu’s Islands, Pulau Redang & Perhentian. In order to produce a variety of interpretation and visualization, The National Art gallery had worked together with a group of 9 artist and photographer from international and national origin with various different expertise and backgrounds. The program lasted 5 days, producing various form of photography and videographic works

Citing an article by the artist through her blog, Normah Nordin (2010) quoted:

‘’Normah Nordin (A.M.N.) has contributed to Malaysian arts for over 35 years. She is an artist extraordinaire who does not limit herself to any particular form of art. Over the years she has been active in visual arts, theatre, television and films, taking up various roles, scriptwriter, acting coach, art director, producer, director and others. She is also an established visual artist. Her paintings, photographs and installations are often exhibited locally and internationally.

This cultural activist is a role model for many young artists. Amongst them, her former students from various academic institutions and her own training centers.

Normah is trained in many areas of the arts. She holds a B.A. in Art & Design, Fine Arts and Sculpture from Institut Teknologi Mara. Throughout the years she has continuously equipped herself with skills & knowledge through self-training as well as formal training.  She has undergone various formal trainings and residencies across the world.

Some of the trainings and residencies she has had the privilege to experience are – Teaching Technique for TV Trainers, TV Lighting & Stage Design and Design, Photography & Stage Design in sponsored by The British Council London; Stage Lighting with Francis Reid in Kuala Lumpur through the British Council; Editing Digital Non-Linear-Avid in Singapore; TV Production, Screenwriting, Directing and Acting at the National Film Corporation Malaysia (FINAS); Master Class in Screenwriting and Master Class in Production Design for Film under the Ministry of Culture, Arts & Heritage (KEKKWA); Film & Theatre Production ‘Teater Popular’ led by the renown Indonesian director the late Teguh Karya in Jakarta and Visits to ‘Small Professional Theatre Companies in 8 American Cities’ under the American Government State Grant. With the Asian Institute of Broadcasting Development (AIBD) Kuala Lumpur she attended workshop on Color Television Production and Design organized by Canadian and German Television Station.

Normah began her career as a Set Designer in RTM in 1972. In the 11 years of her service there she worked herself up and gained recognition for her contributions. When she left RTM she was already a Senior Designer and Acting Head of Design Department.  By 1982, she became an Assistant Director with FINAS, being the original few staff employed with then only a phone, a chair and a table was given the task to set the ball rolling for a new film industry. In 1984, Normah’s career direction took a major turn.

In that year, she was invited by the late Mustafa Nor to join the Drama Centre. The Drama Centre focused on training young talents in all aspects of professional theatre production. Following her passion in the arts and in educating the young, Normah decided to leave her semi-conventional job to pursue her passion. After the demise of her partner, mentor and friend, Centre Stage Performing Arts (CSPA) was formed with the same mission in 1990.  CSPA became a hub and training ground for many young talents involved in theatre, filmmaking and the visual arts. Normah herself was actively involved in all aspects of theatre and filmmaking by this stage.

At the dawn of the new millennium Normah was awarded the A.M.N. (Ahli Mangku Negara) medal for her contribution to the Arts by the reigning Yang Di Pertuan Agung (then the late Sultan of Selangor). She remains to be active in the Arts up to this day.  A respectable figure in the Arts scene, Normah is often called for to give trainings or talks or sit on the jury panel of various notable Art related competitions.

Normah makes it her duty to support and educate the young. Besides being actively involved in the annual ‘Kids Witness News -KWN’ project that involves hundreds of primary school children across Malaysia creating short video production with ‘Panasonic’. For the past few years Normah spends a lot of her time on her Artnest Studio program which was established in 2007; doing philanthropy works in rural areas such as teaching children English through theatre.

Reference link for the blog: bersama: Who is this Normah Nordin?

Datuk A. Samad Said was born in Kampung Belimbing Dalam, Durian Tunggal, Melaka, on 9 April 1935. A Samad Said won the S.E.A Writer Award in 1976 and was awarded the title Sasterawan Negara in 1986 for his continual efforts in penning many contributions towards Malay Literature. His many contributions are observed through the writings of short stories, novels, poetry, drama, essays and criticism, and autobiography.

A. Samad Said was involved in the Bersih 2.0 movement led by Dato Ambiga Sreenavasan in both 2011 and 2012, a movement which fought for a fair and clean election. He was also behind the Gerakan Mansuh PPSMI in 2009; protesting the education of science and mathematics in English, in favor of the use of Bahasa Malaysia.

In 2020, the national art gallery acquired 3 short documentary videos, produced by Mahen Bala, this piece is one of them.

This documentary was shot in Kuala Terengganu and Kuala Lumpur, it is a short video produced to compliment the premier of the  Unvealing the Unseen (1937-1971) Exhibition of Sultan Ismail Nasiruddin coordinated by YM Raja Ihsan at the at the Islamic Art Museum back in 2017.

The acquisition of the video was made to compliment the 4 earlier collection of Sultan Ismail Nasirruddin Shah, giving an expanded context and its history for the future generation.

‘’Mahen Bala is a Malaysian documentarian and visual artist who has worked on documenting Malaysian culture and history for more than a decade. His primary interest is in investigating the human experience, and how memory shapes personal and communal constructs of history.’’  – mahenbala.com

According to the artist, the project was done spontaneously over the course of 48 hour. The artwork firstly made publication through the show INPRINT held by National Art Gallery & guest curated by artist, Juhari Said in 2005, and was acquired into the collection in 2009.

Azizan Rahman Paiman & his wife Suhaila Hashim, is a winner for Bakat Muda Sezaman 2002-2003 for a group artwork entitled On Air. On Air is acquired by The National Art Gallery in 2003. Paiman has exhibited both on national and international level, and are known for installation and performance art. Of recent Azizan Rahman Paiman is currently involved with the 2022 Venice Biennale Collateral Exhibition, organized by PORT Ipoh and partially backed by the National Art Gallery.

Sky Kingdom was led by a cultist named Ariffin Mohammed (b.22 June 1941 – d.22 April 2016). Ariffin Mohammed, more popularly known as Ayah Pin. The cult of Sky Kingdom started in the 80s, the premise of the cult was that Ayah Pin himself was god to all religion. Ayah Pin was pursued by religious authority throughout the 90s and officially became apostate to Islam in 2001. Ayah Pin was based in Besut, Trengganu.

According to an interview with Eric Peris for this particular work, GPO stands for General Post Office, a building that has similar characteristic to the Sultan Abdul Samad Building, an iconic building in Malaya that was completed in 1907, it is among the few building in Kuala Lumpur that portrays a style of architecture akin to Indo Saracenic architecture.

In 1983, Eric had managed to snuck into the closed building to capture the building in his own way, as is, dimly lit save for the natural lights for one last time, perhaps as a key memory of the building as it appears naturally.In this print, Eric capture a dimly lit arch, naturally basked by sunlight, perhaps from a window or an opening, the rest of the structure appears dark and desolated.

At the time, the building was sealed and abandoned. During the time of the protest in 1983, in the same year Eric had went to the building and had notice one of the doors to be open and went inside. Inside the building was dark, save from a little light escaping through the windows of the abandoned building which illuminates one of the arches. Eric then decided to capture the view, deprived of any light source but the natural sunlight that had escaped into the boarded building.

In hindsight, the picture serves as a captivation of moment by Eric the photographer, signifying emotion that highlights the importance of heritage & the role of people to fight and preserve history embedded within cultural structures and art forms. During the moment the picture was captured, it was a subject on the brink of potential demolishment, which was only saved by the keen interest to protect heritage.

The building was eventually saved and is now a heritage site, housing part of offices of the Department National Heritage & Ministry of Tourism, Culture and Arts. The site is regarded as one of the iconic architectural heritages in Kuala Lumpur.